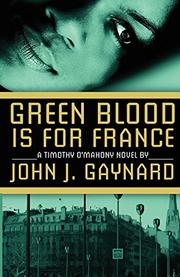 GREEN BLOOD IS FOR FRANCE

Gaynard dissects France’s political corruption in his novel about a police investigation into the murder of a young woman used as a sex toy by French political leaders.

Hardened Irish police detective Timothy O’Mahony investigates the murder of a young African woman after her mutilated body washes up on the Irish coast. Turns out that she disappeared from a luxury yacht chartered by a man vying to be the next French president. The purported reason for the trip was so the candidate could discuss campaign strategies with his advisors. In reality, the trip was an excuse to indulge in wild orgies, and O’Mahony must separate the culprit from the mass of suspects. In Paris, coverups and threats abound as the political rivals and competing police forces try to outdo each other; each proclaims they’re acting “for the good of France.” Gaynard’s (The Imitation of Patsy Burke, 2011, etc) novel examines the corruption and cynical exploitation of former French colonies, as well as France’s role in encouraging the chaos and savagery in the Congo to keep control of raw material supplies. The author’s knowledge of the political and legal systems often verges on political philosophy. Says a puzzled Congo politician, “Why is it only Africans that are charged by the International Criminal Court? Why don’t American or British leaders like Bush and Blair get hauled up?” Not-so-veiled references to Nicolas Sarkozy and Dominique Strauss-Kahn further connect the novel to contemporary French issues. These insights and unusual perspectives would be welcome as a backdrop to the overall narrative; the trouble is, the politics overwhelm the storytelling. Just when O’Mahony begins to develop a personality, other threads intrude. The novel could also do without tedious descriptions of mundane chores, such as taking showers and opening doors.