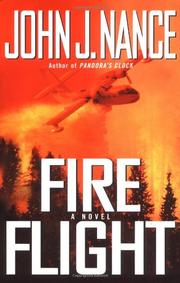 Mixing white-knucklers (Headwind, 2001, etc.) with the occasional near-miss (Turbulence, 2002, etc.), Nance now takes up fighting the wildfires that yearly send up hundred of homes in flame.

Turbulence, in its attempt to fashion the first passenger airline mutiny in history, presented readers with a flight attendant from hell and the looniest pilot since Leslie Nielsen, and forced its story into outrageous inconsistencies. As if to avoid such bent plotting, Nance now abandons the high and the mighty, gets straightforward and down to earth—although massive hysteria and some really bad guys do arise. Living legend and womanizing Jeff Maze has for years flown for Jerry Stein’s fleet of DC-5B, 45-year-old air tankers out of West Yellowstone, planes that need a whole winter’s repair after the way they get beat up during firefighting season. But Misty Ryan, Jeff’s lover of 12 years, knows Jeff’s been acting strange. Jerry Stein has brought Clark Maxwell out of a four-year retirement as a fire-retardant dropper. Jerry’s in a panic because the government may shut him down and itself take over firefighting, while Clark worries that after 17 years of dropping retardant from these worn-out planes, fate—statistically—is hunting him down. So he’s back low-dropping slurry through hellish canyons of smoke plumes, superheated air, and exploding trees. Nance rises quickly into danger mode as Clark finds half of his flight panel inoperable and fuel gauges unreliable. Then accidents in the tanker fleet multiply. What’s causing these disasters—and what’s Jeff Maze got to do with it? And why does Jerry Stein squirm when Clark demands that he fly as copilot in Clark’s rusty Tanker 88?

Nance strives for no style like that of the early Richard Bach in Stranger to the Ground or of Ernest K. Gann in Fate Is the Hunter—in fact, the writing here at first feels hacked out and thriller-thin before it rises to blazing excitement.