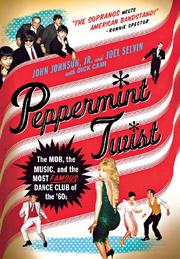 The Mob, the Music, and the Most Famous Dance Club of the '60s

by John Johnson Jr. and Joel Selvin with Dick Cami

True crime meets pop-music history in this history of the Peppermint Lounge, the Twist and the Mafia’s unwitting role in starting a national craze.

In 1960, Dick Cami’s father-in-law, Johnny Biello, a high-ranking Mafioso, bought an off-Broadway dive as a favor to a friend, and Cami suggested having rock ’n’ roll music in the place. Within months, the Peppermint Lounge became the hottest club in the country, as New Jersey teens mixed with such celebrities as Norman Mailer, Ava Gardner and even the Beatles—all doing the Twist. “The Twist hit like an atomic bomb and the Peppermint Lounge was ground zero,” write veteran journalists Johnson (co-author: Blood Brothers: The Inside Story of the Menendez Murders, 1994) and Selvin (Summer of Love: The Inside Story of LSD, Rock & Roll, Free Love and High Times in the Wild, 1994, etc.). All of this surprised Biello, who saw the place as a nice front for his loan-sharking and gambling rackets. However, not one to pass up a buck, he let Cami make the place legit and even opened a second lounge in Florida. The authors go back and forth between telling the stories of Biello’s rise in the Mafia and his constant attempts to get out and the rise of the Twist. Biello’s tale is one of Mafia intrigue and Runyonesque figures such as his younger brother Scatsy, while the tale of the Twist is one of the early rise of youth culture, which would soon become a revolution. It’s also the story of a young singer named Chubby Checker, who, once spotted by pop-music king Dick Clark, made a career out of the song “The Twist” (originally recorded by Hank Ballard and the Midnighters) and how every singer from Sam Cooke to Frank Sinatra made a Twist record. The two stories shouldn’t fit, but they do.

A fun and fascinating read.