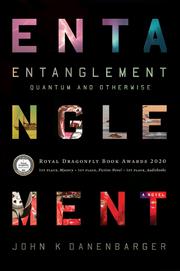 Various culprits—linked in numerous ways—become involved in murder and other illicit deeds in this debut literary/crime novel.

In 2044, Geena Nuss gets word that one of her parents is dead. The story then hops back 60 years, when Geena’s mother, Beth Sturgess, is living as a drug-addled prostitute. She escapes the life with help from Massachusetts stripper Joe Tink, who gets her a job aboard a boat. But that vessel takes her to Bermuda, where she ultimately lives with a man who, according to locals, is a slave owner and rapist. Other characters gradually enter—and re-enter—the narrative, from Beth’s eventual husband, Kevin Nuss, who’s a cop, to Joe’s lover Martin Case, a math professor. Some have multiple connections: Ellen McKinnon meets Martin at a hotel bar, but she has ties to individuals in other, surprising ways. Nearly everyone has a dark past, including someone seeking revenge and another who’s a serial killer. By the mid-21st century, Geena is alone, her family members either dead or living elsewhere. Trying to reunite with an old friend and her estranged brother, Davis, she may soon learn the essential part that physics has played in everybody’s lives. Danenbarger excels at developing characters, which considerably benefits a story of intersecting lives. Some backstories as well as the players themselves are unsettling or unsavory, though they never fail to engage. But the best moments are the links among characters via encounters and unexpected relationships. These even induce suspense: Successive chapter titles cite a “Friday” of impending doom, with a car wreck, which Kevin witnesses, that’s bound to involve established characters. While the author astutely describes quantum entanglement as a possible reason for the interconnected characters, he wisely keeps the titular concept ambiguous and the ending wide open. Nevertheless, the novel’s timeline is, in a few instances, perplexing. For example, Geena is “in her fifties” in 2044, but her parents meet in 1997; and Beth refers to a quarter century as “several years.”

Gritty characters solidify an intelligent story and an abstract concept.