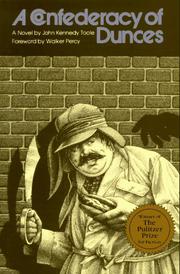 A CONFEDERACY OF DUNCES

A masterpiece of character comedy finally published more than ten years after its writing, thanks to novelist Walker Percy—who furnishes a foreword.

The character? Ignatius J. Reilly—reader of Boethius and drinker of bottle after bottle of Dr. Nut, virgin and lute player, writer-down of maledictions against contemporary society (in Big Chief writing tablets), owner of an erratic pyloric valve that gives him ""bloat,"" wearer of desert boots, tweeds, and a green hunting cap with flaps. He's huge and obese, he lives with his widowed dipso mother in a ramshackle New Orleans half-house. Fastidious slob, rhetorical wreck in excellsis, Ignatius was once a grad student—but the trauma of a ride on a Greyhound Scenicruiser to Baton Rouge for a teaching-job interview has sworn him off work ever since. Mother Reilly, however, backs him into another try at employment. And his first job is at a hopeless clothing factory, Levy Pants, where the bookkeeper is senile (""Am I retired yet?"" she every so often asks no one in particular) and where the black factory workers use the machines for home sewing, since no one actually buys Levy Pants. Shocked, Ignatius organizes a ""Crusade for Moorish Dignity"" to better the black workers' plight—and that's the end of that job. Next he's a hot-dog vendor, and then events take an indescribable spiraling turn involving pornographic pictures, a libel suit against Levy Pants, an old Bronx girlfriend of Ignatius', a woeful undercover cop, and a sleazy bar. (Here we meet grandly funny Burma Jones, an unwilling black janitor and sidewalk shill: ""Hey! All you peoples draggin along here. Stop and come stick your ass on a Night of Joy stool. . . . Night of Joy got genuine color peoples workin below the minimal wage. Whoa! Guarantee plantation atmosphere, got cotton growin right on the stage right in front your eyeball, got a civil right worker gettin his ass beat up between show. Hey!"") The novel can hardly contain burstingly funny Ignatius—and the mix of high and low comedy is almost stroboscopic: brilliant, relentless, delicious, perhaps even classic.

Unfortunately, this is all we'll have of Toole's talent; he committed suicide in 1969, age 32, leaving only this astounding book.