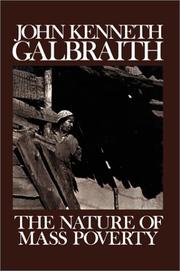 THE NATURE OF MASS POVERTY

Apply the Galbraithian remedy for worldwide rural poverty, and it will always be with us--there will simply be fewer of the rural poor. Which Galbraith, who sees such poverty as ""intractable,"" might equate with success. To make his case, he first debunks a range of generally discredited explanations--lack of natural resources (look at Japan), socialist bureaucracy (look at China vs. India) or capitalist exploitation (look at Hong Kong and Taiwan vs. China), insufficient capital or trained management (causes and consequences equally), corruption (ditto), and that plaint of the poor themselves, the legacy of colonialism (""what is not explained is why this effect""--or that of independence--""was so diverse""). No matter how unoriginal Galbraith's refutations, they are sharply and succinctly put, and will be absorbed just because he uttered them--as will his mockery of economic-aid programs that equate what rich countries have (technical skills and capital) with what poor countries need. It is when he assumes poverty to be massively self-perpetuating, a matter of realistic ""accommodation to the culture of poverty"" (vs. expectations of improvement), that many will bridled--not alone, as he suggests, because this is a ""disparaging"" judgment, but because it leads him to propose that efforts be concentrated on helping the restless, energetic minority to escape. And, though some are to escape within the local culture (by improving their agricultural practices and thus their income), most are to look for work elsewhere, in the cities or abroad. Education, dissatisfaction, migration: this was Galbraith's route as a young Scotch Canadian from rural Ontario, and as he notes it well served Swedish- and other hyphenated Americans; but whether it has proved as satisfactory to today's Yugoslavs in Germany as he claims is doubtful, however much it may have benefitted the Yugoslav and German economies. So: kudos for Galbraith's positive attitude toward (say) illegal West-Indian immigration, some concern for those endangered species back home.