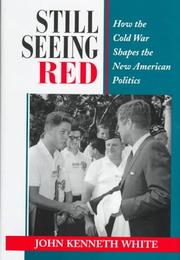 How the Cold War Shapes the New American Politics

A thorough and thoughtful study, but not the one suggested by the title. White (Politics/Catholic Univ.) provides an excellent political history of the Cold War era, with painstaking research supporting a well-written, intelligent presentation of rather familiar material. Certainly, no one will dispute his assessment of the Cold War's impact on domestic politics in the 1950s80s: Republicans were the primary beneficiaries because they were able to paint liberals as soft on communism, and Cold War concerns and rhetoric invaded the discussion of every political issue. But the focus suggested by the book's subtitle, on the impact of Cold War politics on the postCold War era, is largely absent. White's examination of this era follows from a foray into the most picked- over subject of political research, the evolution of contemporary political parties. His conclusions are sensible and, again, familiar: A party system with meaningful, programmatic parties has disappeared; presidential campaigns have come to focus on character rather than issues; presidential contests are now fought over the corpse of the Republican rather than the Democratic party; presidential and congressional elections have become increasingly separated in their focus and results. These observations constitute solid historical description, but as political analysis they fall prey to a common dilemma. While it is unavoidably the case—and consequently of limited interest—that an era will shape its successor, determining how it does so requires identifying causal relationships between the two eras. White's work is suggestive but ends at a good place to start. An explanation of how and why we are ``still seeing red,'' rather than a summary of the ways that we are, would have been more welcome and original. Talented author, mistargeted effort.