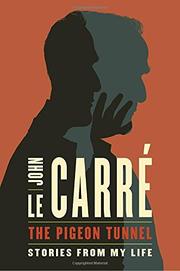 Stories from My Life

An esteemed novelist offers alternately wry and haunted ruminations on a life of literature and intrigue.

In his 80s, le Carré (A Delicate Truth, 2013, etc.), the author of espionage-themed bestsellers and a Cold War–era member of British intelligence, seems keenly aware that his life blurs into his fiction. In this memoir, in which he pointedly uses his real name, David Cornwell, the author acknowledges the difficulty of teasing biography from a life devoted to novel writing. “Pure memory remains as elusive as a bar of wet soap,” he writes. “Or it does for me, after a lifetime of blending experience with imagination.” He avoids strict chronology in favor of a loose, episodic structure that outlines his work’s real-world influences and allows him to consider his evolving views on patriotism, geopolitics, the lives of writers, actors, directors, and rogues (specifically his con-man father), and other topics. He offers nuanced looks at unnerving times, especially regarding his intelligence work in West Germany; he argues that the soft reception given ex-Nazis fed leftist terrorism by young Germans decades later. Le Carré captures the creeping crises of the Middle East via the pursuit of a cagey Yasser Arafat, which inspired his novel The Little Drummer Girl: “After Arafat, anything else feels normal.” Similarly, the author contrasts his experiences in perestroika-era Russia with the robber-baron 1990s. He wonders, “were the new crime bosses the old ones in new clothes?” while expressing rueful nostalgia for his old-school adversaries. “I met two former heads of the KGB in my life and liked them both,” he writes. Le Carré also thoughtfully captures the tenor of his friendships with many luminaries (Alec Guinness, Richard Burton, Joseph Brodsky) while soft-pedaling old animosities (with the exception of traitor Kim Philby). Yet for all the cinematic glamour of le Carré’s experiences, reflections on the workaday realities of fiction writing may provide the most engaging aspect of this colorful valediction.

A satisfying recollection of a literary life well-lived.