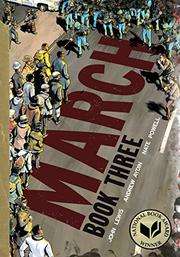 by John Lewis with Andrew Aydin ; illustrated by Nate Powell

A living icon of the civil rights movement brings his frank and stirring account of the movement’s most tumultuous years (so far) to a climax.

As chairman of the Student Non-Violent Coordinating Committee between 1963 and 1966, Lewis was directly involved in both public demonstrations and behind-the-scenes meetings with government officials and African-American leaders. He recalls both with unflinching honesty in this trilogy closer carrying his account from the bombing of the 16th Street Baptist Church to his eventual break with SNCC’s increasingly radical elements. Alternating stomach-turning incidents of violence (mostly police violence)—including his own vicious clubbing on the Selma to Montgomery march’s “Bloody Sunday”—with passages of impassioned rhetoric from many voices, he chronicles the growing fissures within the movement. Still, despite the wrenching realization that “we were in the middle of a war,” he steadfastly holds to nonviolent principles. The passage of the 1965 Voting Rights Act marks the end of his account, though he closes with a final look ahead to the night of Barack Obama’s 2009 inauguration. Powell’s high-contrast black-and-white images underscore the narrative's emotional intensity with a parade of hate-filled white faces and fearful but resolute black ones, facing off across a division that may not be as wide as it was then but is still as deep.

This memoir’s unique eyewitness view of epochal events makes it essential reading for an understanding of those times—and these.