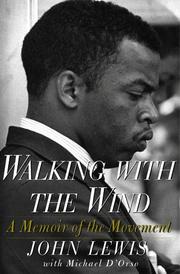 WALKING WITH THE WIND

A Memoir of the Movement

by John Lewis with Michael D’Orso

Georgia congressman Lewis (with journalist D’Orso’s help) crafts a passionate, principled, and absorbing first-person account of the civil-rights movement—dramatic, well-paced history fired by moral purpose and backed by the authority of hard time in the trenches. Lewis’s childhood was the quintessence of post-Reconstruction southern black life. This son of Alabama sharecroppers grew up in a rural shotgun shack, picked cotton, matriculated in a tumbledown one-room schoolhouse, and faced Jim Crow segregation on every trip to town. His adulthood is the quintessence of the struggle to break that oppression. Lewis’s itinerary during the civil- rights movement reads like a highlight of its most significant moments. You name it, he was there: launching the nonviolent student protest movement at the Nashville sit-ins, Freedom Riding through the Deep South, delivering the March on Washington’s most controversial speech, serving time in Mississippi’s infamously brutal Parchman prison, organizing the voter registration drive that brought Schwerner, Goodman, and Cheney to Mississippi, marching in Birmingham in 1963 and Selma in 1965. Lewis served as chairman of the Student Nonviolent Coordinating Committee, and his analysis of rivalries between SNCC and the more mainstream, bourgeois Southern Christian Leadership Conference (headed by Martin Luther King) and his candid assessment of notable players (King, Stokely Carmichael, Julian Bond) serve as reminders of the movement’s complexity. Gut-wrenching firsthand descriptions revisit the appalling brutality endured by demonstrators (Lewis suffered a fractured skull leading marchers across the Edmund Pettus Bridge on Bloody Sunday). He memorializes not only the drama, but the patience and steely courage of “the days and days of uneventful protest” that laid the groundwork for big developments—and that risk being overlooked now. Lewis’s faith in Gandhian nonviolent resistance is unshakable, as is his devotion to King and to the thousands of working-class blacks who risked their lives confronting southern tyranny. A classic, invaluable blockbuster history of the civil-rights movement.