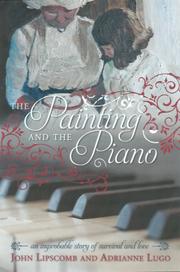 The Painting and The Piano

An improbable story of survival and love

by John Lipscomb with Adrianne Lugo

Two adults overcome damaging childhoods and addictions to find each other and rebuild their lives together in this affecting debut memoir.

Though the two authors didn’t meet until they were adults in recovery and come from very different backgrounds, their struggles with alcoholism brought them together. While Lugo says she was actually born addicted to heroin, she spent most of her early childhood raised by loving foster parents, the Cahns, on Long Island. But when her biological parents returned to reclaim custody, the Cahns were ultimately forced to give her up despite her wishes and a lengthy court battle. Her time with her biological parents was marked by physical and verbal abuse that left scars that lingered through adulthood. Lipscomb, by contrast, was raised in an upscale Missouri suburb by a very prominent family. Yet his beautiful socialite mother was a raging alcoholic whose behavior caused the breakup of her marriage. Lipscomb began drinking himself as a teenager, and his alcoholism started to consume him, destroying his first marriage and causing him to lose custody of his children. Eventually he sought treatment from Alcoholics Anonymous, where he met Lugo, who was in an unhappy marriage and addicted to both alcohol and pills. As they became closer, romantically and emotionally, they began to heal; the title refers to two happy memories of their respective childhoods that they embraced, with a renewed sense of peace. The memoir is written in an accessible narrative style, with each chapter alternating between the two authors. Toward the end, when the narrative begins to give way to platitudes like “We believe that if we can find our way to the light, then anyone can,” the story starts to feel a little repetitive. Yet those words do feel genuine because of the despair and joy detailed in the previous pages. This memoir should serve as, in the authors’ words, “a roadmap of sorts” for others.

A vivid, moving account of addiction, trauma, and hard-won triumph by two survivors.