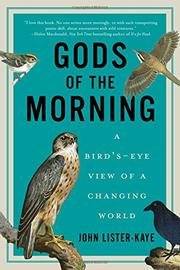 GODS OF THE MORNING

A Bird's-Eye View of a Changing World

A distinguished British naturalist reflects on his encounters with the birds of the Scottish Highlands and how global warming has impacted these populations.

Set in the Highlands hamlet of Aigas, the 19 essays in the book illuminate the way birds not only “respond quickly to shifts in climate and human behavior,” but also serve as living barometers of “the success or failure of other wildlife.” Lister-Kaye (At the Water’s Edge: A Personal Quest for Wildness, 2010, etc.) notes that minute shifts in light and weather conditions—things that humans often do not notice—can severely affect not only migration patterns of seasonal birds like geese, but also the nesting patterns of other, nonmigratory birds like rooks. Temperature extremes also inevitably take their toll on bird populations. During a three-month subzero period in the winter of 2009-2010, the hardy barn owls of Aigas (where Lister-Kaye established Scotland's first field studies station in 1976) starved for want of access to the mice and voles that had taken refuge underground. The author also shows how human interventions on the landscape—e.g., electricity distribution lines—impact birds like the whooper swan, which collide with the lines and die slow, agonizing deaths. With its use of chemical fertilizers, pesticides, and mechanized equipment, farming also impacts birds by killing off the bugs, beetles, and flies that feed them. Lister-Kaye’s lyrical descriptions of Aigas and the animal denizens he so clearly loves offer a poignant counterpoint to the destruction he observes. Yet for all the sadness he expresses at the way people have treated the natural world, he still offers hope that humans can work with nature by adopting the kinds of green measures—installing biomass boilers and solar collectors and “preach[ing] sustainability” to school children—that Aigas employs. In so doing, they can restore some semblance of balance in the earthly kingdom overseen by his winged “gods of the morning.”

An evocative and heartfelt examination of a beautiful landscape and its fauna.