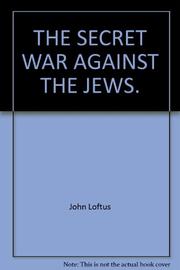 THE SECRET WAR AGAINST THE JEWS

An alternative, conspiratorial retelling of major events of the last 75 years, from the authors of Unholy Trinity (1992). Former Justice Department Nazi-hunter Loftus and Australian journalist Aarons would have us believe that much of recent Western history has had as its common theme ``Get the Jews.'' However, they are far more convincing in arguing that the underlying motivations for most of the evil plots they describe were fanatical anti- communism and/or greed; Jews—mostly pre-1948 Zionists and post- 1948 Israelis—sometimes got in the way. Thus wealthy Americans invested in prewar Nazi Germany because there was money to be made, and Nazis were welcomed to postwar America as fighters against communism; the State Department and American boardrooms were filled with Arabists who had no sympathy for a Jewish state not because it was filled with Jews, but because it was empty of oil. Loftus and Aarons undermine their work by its enormous scope, which makes it virtually impossible to distinguish one chess-gambit conspiracy from another. Also, the sources for their most explosive revelations are ``confidential interviews'' with unnamed veterans of an alphabet soup of espionage agencies: Little hard evidence is presented. Still, like all good conspiracy books, this one offers plausible and intriguing explanations for gray areas of history. These range from how American companies wrested control of Saudi Arabia's oil fields from Great Britain in the 1920s and '30s to the way countries were convinced (blackmailed, say the authors, in a convoluted plot involving Nelson Rockefeller, who was allegedly selling oil to the Nazis all through WW II) to support the creation of Israel in 1948. The book is also enlivened by a rich rogues' gallery, including double (or maybe triple) agents Jack and Kim Philby; and John Foster and Allen Dulles, accused of subverting American foreign policy to their insatiable greed. A conspiracy book offering tasty morsels if one reads with a grain of salt and disregards its sensationalized and misleading title. (16 pages photos, not seen)