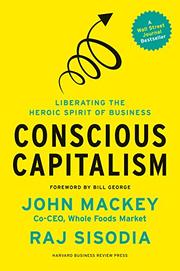 Liberating the Heroic Spirit of Business

“In the long arc of history, no human creation has had a greater positive impact on more people more rapidly than free-enterprise capitalism,” write the authors. That statement serves as a good summary of this book, which combines a brief but lucid history of the capitalist system with Mackey’s own sometimes-idiosyncratic interpretation of it. Flying in the face of Economics 101, for instance, he insists that a goal of the capitalist need not be profit maximization and that self-interest can be broader than the mere individual self. Mackey combines a strong sense of social service with the thought that there are goals beyond mere money for the successful investors. As the book progresses, Mackey’s vision becomes more singular, with sharp attacks on crony capitalism—the unholy wedding of big government with certain strands of big business—side arguments on animal welfare, and heightened consciousness and a well-reasoned critique of the vaunted “triple bottom line.” Throughout, his insistence on long-term thinking is welcome—and too seldom found in popular business writing. Though he has been in the news lately for seemingly off-the-mark statements equating health care reform with fascism and holding that there’s a positive side to climate change, Mackey presents a reasonable and mostly unobjectionable defense of capitalism at a time when, thanks to the excesses of the wealthy, it needs defending.

Light on ideology and long on thoughtful analysis—a good book to hand to the budding entrepreneur in the family.