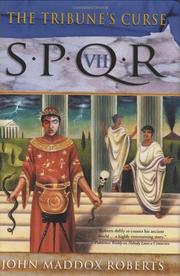 Caesar’s Gallic Wars drag on, but narrator/sleuth Decius Caecilius Metellus the Younger (SPQR VI: Nobody Loves a Centurion, 2001, etc.) couldn’t care less. Caesar has sent the young nobleman back home to Rome, where he plans to immerse himself in culture, canoodle with his new wife, Caesar’s niece Julia, and run for his first political office. His calm, and that of the city, is disrupted by the military plans of Crassus, Pompey and Caesar’s ambitious co-triumvir. Tensions are already high among the three; now Crassus’ eagerness to embark on this new campaign, an apparent challenge to militant Caesar, rouses public uneasiness. In the midst of his ceremonial departure, tribune Aetius Capito, a political enemy, puts a curse on Crassus and the city for sanctioning his expedition. This is bad enough, but Aetius uses “the Secret Name of Rome,” a word known only to oracles and suchlike, to make the curse stick. It falls to Decius to save the city by ferreting out the individual who gave Aetius the ammunition and incidentally treating the reader to a tour of ancient Rome’s tenderloin. Midway through his investigation, Aetius is found murdered, and the probe expands to the political class, enemies of Crassus and/or the triumvirate. Clear-eyed, tart-tongued Julia plays Nero Wolfe to Decius’ Archie Goodwin, staying home and sifting the information he gleans in his legwork.

Though the mysteries come late in the story, smart, brisk writing and abundant historical color keep up interest until they arrive.