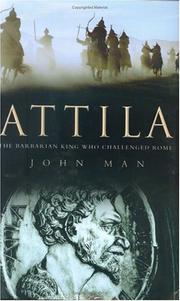 A Barbarian King and the Fall of Rome

A surprisingly intimate view of the man labeled “God’s scourge” by a Roman Empire in its death throes.

British historian Man (Genghis Khan, 2005, etc.) is also a travel writer (Gobi, 1999), and his physical knowledge of the venues about which he writes lend authority to his reconstitution of ancient history. In recalling a certain Carpathian pass, for instance, through which the Hunnish horde would have passed on its way to wreak havoc and chaos on the fifth-century remnants of Imperial Roman civil order, he writes, “Good skiing in winter; pleasant Alpine hikes in summer.” He’s equally adept at mining scholarly and contemporary sources: In a nearly chapter-long paraphrase of Priscus, the one Roman administrative apparatchik to have met Attila and left an extensive written record, Man serves up an episode of courtly intrigue worthy of Shakespeare. The author tends to favor the speculative view that the Huns were descendants of a central Asian tribe with possible Turkish origins known by the Chinese, whom they first harassed, as the Xiongnu (pronounced with a guttural “h” sound). Their military might, derived from a pastoral nomadic ancestry, was based on the terrifying expertise of mounted archers; their power would not be surpassed, Man suggests, until the modern era of automatic weapons. Couple this with the known cruelty (at least in the view of contemporaries including other so-called barbarians) of a short, unattractive, but definitely charismatic man with beady, shifty eyes who regularly impaled his captive victims on wooden stakes, and the basis for the myth of Attila becomes clear. Yet, the author notes, in Eastern Europe, particularly Hungary, it persists as the legend of a hero.