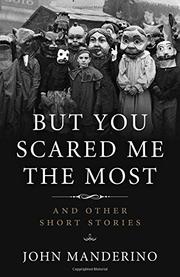 BUT YOU SCARED ME THE MOST

And Other Short Stories

Maine-based writer Manderino (The H-Bomb and the Jesus Rock, 2010, etc.) plumbs the depth of domestic horror in these fleeting but beguiling stories about ghosts, murders, monsters, and madmen.

In “A Certain Fellow Named Phil,” our narrator confesses to killing Veronica, an inflatable sex doll. “Nessie” finds a middle schooler obsessed with the sea monster and the sadness of “Puff the Magic Dragon.” In “Bigfoot Tells All,” the mighty beast tells us about his girlfriend (a bear) and the time he ate a person recently: “The look on that man’s face. Priceless.” “Wolfman and Janice” is a domestic drama in the vein of Tom Waits about a werewolf and his girlfriend. The title story finds an old woman frightened of a bump in the night speaking to a dead husband who may or may not be imagined. “I don’t think I’m going to die tonight,” she says. “But I’ll be there soon, George, I’m sure. Meanwhile, be happy, dear. But not completely.” In “No Place Like Home,” a boy wonders about the differences between Dorothy Gale and a local girl named Gloria. “But maybe Dorothy had the right idea, staying close to home,” he ponders. “Gloria’s body was discovered one morning under some bushes in a park two towns away, her bicycle lying nearby.” “Bob and Todd” covers the dialogue between a hitchhiker and a driver who may or may not have a dead body in the trunk. In “Jamey’s Sister,” a dead soldier’s sister must compose a letter to the president. “Mr. President, do you know what you are? You are a monster. You don’t have horns or hoofs or fangs or fur, but that is what you are, a monster,” she writes. Still other stories concern themselves with twisted versions of Barbie, Nancy Drew, and other pop-culture icons.

Clever fables about nightmares both real and imagined.