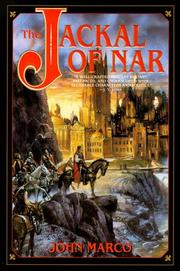 THE JACKAL OF NAR

Jumbo fantasy, the first of a series entitled Tyrants and Kings, from newcomer Marco. Arkus, Emperor of Nar, has ordered Prince Richius Vantran of Aramoor and his army into Lucel-Lor to assist the autocratic Daegog against a popular uprising led by Tharn, a magic-wielding warrior-priest. But neither supplies nor reinforcements arrive, and Richius’s campaign seems lost—until cavalry sent by the emperor gallops to the rescue. Richius intervenes, however, when their commander, the cruel, arrogant Baron Gayle, attempts to rape the comely young Dyana. Promised in marriage to Tharn, spirited Dyana has rejected the union and fled. Furious, Tharn uses magic to grab Dyana and defeat all his enemies, despite the gods’ injunction that the magic be used only to heal and help. Richius sadly goes home, learning there that his father is dead. The emperor’s spymaster, Count Biagio, instructs Richius to attack Lucel-Lor again: the ancient, dying emperor will stop at nothing to obtain Lucel-Lor’s magic to make him immortal. Biagio warns of horrid consequences if Richius refuses, and gives him the lovely Lady Sabrina for his bride. Though Richius loves Dyana, he dares not refuse Sabrina. Later, Tharn persuades Richius to meet with him in Lucel-Lor. While Richius is away, Biagio deposes him and gives Sabrina to Gayle; the latter, horribly mutilated in the war, hates Richius more than ever. The gods, Richius discovers, have ruined Tharn’s body as punishment for misusing the magic. Yet though Dyana has married Tharn, her daughter is Richius’s. Gayle sends Richius Sabrina’s broken body. Finally, when Richius learns that his father was treacherously murdered, he sides with Tharn to help defend Lucel-Lor against the renewed imperial assault led by the monstrous Gayle. An absorbing, deftly plotted, forgivably overlong debut with promising character developments and a well-rounded, satisfying end.