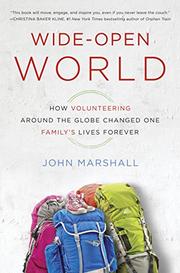 How Volunteering Around the Globe Changed One Family's Lives Forever

Getting bitten by a spider monkey multiple times was not what Marshall was looking for when he and his wife decided to take their two teenage children on a six-month, around-the-world trip based on volunteerism. “Uninspired” in his work, with his eyes “constantly red from too much computer time,” the author was “listless, unmotivated, going through the motions of life—which was a fairly accurate description of my marriage at the time, too.” Although still in love, there was no spark or passion with his wife, Traca. They wanted more for themselves and for their children, who were locked into the computerized social media world like so many American children. So, they rented their house in Maine and set out, first landing at the Osa Wildlife Sanctuary in Costa Rica, where the spider monkeys were free to roam and the humans were often at their mercy. From there, the family flew to New Zealand and worked on a variety of farms, spending days pulling mountains of weeds to reclaim the native bush from invasive plants. Then they went to Thailand for a month, where they taught English in a small village school and Marshall’s two children “were treated more like visiting pop stars than untrained volunteers.” The next stops included an orphanage in India, a school in the Himalayas and a short visit in Portugal. Marshall’s use of rich details locates readers firmly in each time and place, enabling them to sense the adventure, wonder and joy he experienced in his surroundings and in watching his children grow into hardworking, more responsible teens, as well as the frustrations and disappointments he and his family inevitably encountered along the way.

A great armchair adventure that should inspire others to consider voluntourism as a way to help others and see the world.