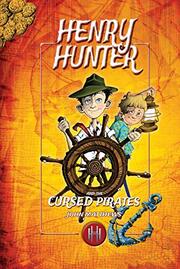 HENRY HUNTER AND THE CURSED PIRATES

From the Henry Hunter series, volume 2

In a second brush with the supernatural (following Henry Hunter and the Beast of Snagov, 2016), brainy young sleuth Henry and his faithful chronicler, Adolphus, are kidnapped by undead pirates. Yo ho ho!

News that a friend’s parents have vanished on a cruise in the Caribbean prompts the dapper kid detective (looking ever natty in suit, tie, and fedora in Tankard’s lavishly detailed drawings) to take a quick sabbatical from St. Grimbold’s School for Extraordinary Boys and fly to Barbados to investigate. Hardly has he begun than an ectoplasmic tentacle grabs him and his sidekick, Dolf—depositing both aboard the spectral ship of Blackbeard himself. The legendary pirate is still around courtesy of a curse laid on a certain bit of booty and, since ghosts can’t hold shovels, bent on collecting hapless tourists to dig up buried treasure. Matthews enthusiastically chucks bits of pirate lore, along with the odd skeleton, map, and treasure chest, into the enterprise, and for additional atmosphere, the illustrator strews margins and corners with bugs, fish, stormy seas, and nautical jetsam. Aside from a “Rastafarian” guide, the entire cast, living and otherwise, is evidently white (and, with one minor exception, male). By the end, the curse is broken, the pirates gone, the captives rescued, and Henry himself mysteriously vanished in the wake of an encounter with merpeople. Stay tuned.

There’s nothing exceptional here, but the otherworldly elements and headlong pacing will sweep readers along.