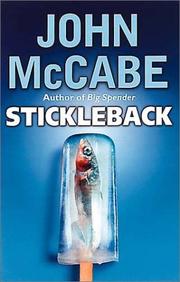 An unambitious meander through the life of an entirely drab British office worker, in fourth-novelist McCabe’s US debut.

Ian Gillick is a ’90s child of England denied his right to boring routine when his girlfriend, Sue, leaves him. His officemate is a Trekkie bloke, obsessed with television while longing to be more like Ian, for whom “other people were merely a facility which enabled him to compete with the all-consuming boredom which tormented his consciousness.” We follow Ian as he visits porn stores, is threatened by men with menacing tattoos, takes odd pills instead of the more simple alcohol, and acts basically like a wanker. And Archie the officemate is truly strange as he indulges in the many available Trek spin-offs, but even Ian can describe things only in terms of movies he’s seen. And when, like a movie, life suddenly starts to get more interesting, with guys beginning to chase Ian and people actually leaving messages on his answering machine, it surely must speak to Ian’s popularity. And yet even so, though “he had never felt suicidal, he had also never felt as low as this.” Which way will this crazy life turn? Will Ian get mixed up in a scam to steal electronic money, or simply continue miring himself in dreams of Sue? Will things (improbably) lead to violence? Will Sue reappear? And wouldn’t we be happier if Ian had just been left to his comfortable routine—since we all know (don’t we?) that “the thing to do was reduce life to its bare, sun-bleached bones. Do only the things that need doing and do them without thought. Swim through life like a stickleback.”

Shallow titillation. What might have been an exposé of the 1990s is instead a forgettable indulgence in them.