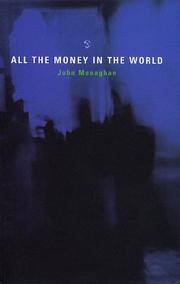 ALL THE MONEY IN THE WORLD

Menaghan was born in New Jersey to Irish-American parents. He now spends summers in Ireland and lives the rest of the year in Venice, California. Among other awards, he has won an Academy of American Poets Prize. This is Menaghan's first published collection, and as such it marks an auspicious beginning. Menaghan's work is humorous, ironic, erotic, neurotic, and tender both by turns and often simultaneously. In one poem, called simply `Fire,` he describes the passion of two lovers in terms that are sensual and metaphysical in a manner reminiscent of John Donne. `We brand our flesh forever with each other's fingerprints.` Many of the verses in the first half of the collection dwell on relationships in which there is at least the hope of sexual fulfillment, as when a friend of the poet reveals she is considering becoming a nun. `I cup your marble hands in mine, and coax you into one more glass of wine.` Here Menaghan's voice rings clearly and truly. But about midway through the volume, he becomes conscious of what he's doing and his voice cracks. He tries to be hip and modern, composing a series of poems on jazz legends rather than to the people he knows, and loses much of the momentum generated by his earlier works.

Menaghan's verse is quite wonderful when he does not stray too far from his roots. He should indeed have `beg[ged] for an incomplete in Modernism.`