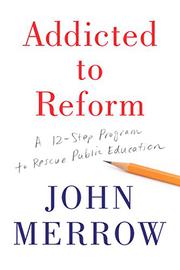 From an award-winning career as an education correspondent, Merrow (The Influence of Teachers, 2011, etc.) sees a nation desperately in need of recovery from addiction to testing and pouring good money after bad.

There is no quick fix for our failed schools, writes the author, who has won the George Polk Award and two George Foster Peabody Awards. Instead, we need radical reform of a system that has become obsessed with data and metrics, with graduation and dropout rates that can be easily manipulated, and with schools that would rather their students be obedient and easily controlled, regurgitating the facts they have been fed, than to have their creativity and intellectual curiosity unleashed. Employing the 12-step program of Alcoholics Anonymous as the organizing principle for his manifesto, he writes, “I am convinced that we as a nation are ‘hooked’ on what we hope will be quick fixes for deep systemic problems. We are in denial.” The comparison and the book’s format only work to a point, as Merrow’s analysis, not surprisingly, does a better job detailing the problem than the solution. The major problem, as so many have previously suggested, is that standardized testing encourages teachers to teach to the test rather than engage young minds, particularly when those test results will be used to evaluate those teachers. There is big money in those testing services and in school reform in general, some of it going to administrators who are stronger on rhetoric than on real education, some to the likes of Amazon and Apple for technology that is often misused or misunderstood, and some to big pharma within the overdiagnosed, pill-popping culture that would prefer to see students medicated than stimulated. The author mixes his diagnoses and prescriptions with four decades of anecdotes and reporting, insisting that the current system “is flawed beyond repair.”

One can agree with most of Merrow’s points without seeing the path forward to the more studentcentric schools he envisions.