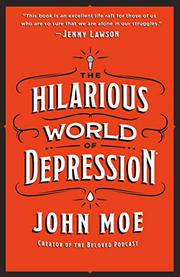 THE HILARIOUS WORLD OF DEPRESSION

The creator and host of the titular podcast recounts his lifelong struggles with depression.

With the increasing success of his podcast, Moe, a longtime radio personality and author whose books include The Deleted E-Mails of Hillary Clinton: A Parody (2015), was encouraged to open up further about his own battles with depression and delve deeper into characteristics of the disease itself. Moe writes about how he has struggled with depression throughout his life, and he recounts similar experiences from the various people he has interviewed in the past, many of whom are high-profile entertainers and writers—e.g. Dick Cavett and Andy Richter, novelist John Green. The narrative unfolds in a fairly linear fashion, and the author relates his family’s long history with depression and substance abuse. His father was an alcoholic, and one of his brothers was a drug addict. Moe tracks how he came to recognize his own signs of depression while in middle school, as he experienced the travails of OCD and social anxiety. These early chapters alternate with brief thematic “According to THWoD” sections that expand on his experiences, providing relevant anecdotal stories from some of his podcast guests. In this early section of the book, the author sometimes rambles. Though his experiences as an adolescent are accessible, he provides too many long examples, overstating his message, and some of the humor feels forced. What may sound naturally breezy in his podcast interviews doesn’t always strike the same note on the written page. The narrative gains considerable momentum when Moe shifts into his adult years and the challenges of balancing family and career while also confronting the devastating loss of his brother from suicide. As he grieved, he writes, his depression caused him to experience “a salad of regret, anger, confusion, and horror.” Here, the author focuses more attention on the origins and evolution of his series, stories that prove compelling as well.

The book would have benefited from a tighter structure, but it’s inspiring and relatable for readers with depression.