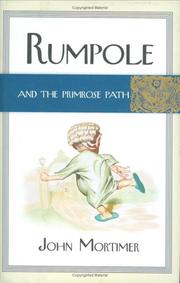 RUMPOLE AND THE PRIMROSE PATH

Like Sherlock Holmes, Horace Rumpole has returned from the grave (Rumpole Rests His Case, 2002), commencing with his no-nonsense escape from the dubious convalescent home in which he’s been immured.

Times have changed, he finds on his return to number 4 Equity Court. Samuel Ballard, QC, the Head of Chambers, has hired Luci Gribble as Director of Marketing and Administration, and the hard-bitten Luci has responded by falling for Soapy Sam. And his fling with celebrity when he defends lawyer-bashing police commander Bob Durden on a charge of murder-for-hire gives Rumpole a higher profile and even a few briefs of his own. Mostly, though, it’s business as usual as Rumpole defends not murder cases—his defense of a religious zealot accused of strangling a lap dancer is the least interesting of these half-dozen tales—but accusations of pickpocketing, invasion of privacy, and burglary-cum–violation of the bathroom. Mortimer’s seen no reason to expand his ritualistic view of the short mystery in which the accusers invariably turn out to be guiltier than the accused. Fortunately, the trimmings, from Claude Erskine-Brown’s frenzy to confess the most minor indiscretions to his wife the judge to Soapy Sam’s avowed desire to cover Luci with custard, are as savory as ever.

Not by a long shot Rumpole’s finest hour, but his many fans will share his wife’s pleasure in the fact that he’s come back at all.