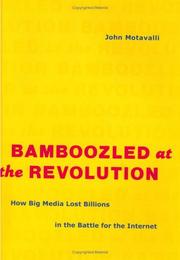 BAMBOOZLED AT THE REVOLUTION

How Big Media Lost Billions in the Battle for the Internet

Knowing inside account of the major media conglomerates’ efforts to embrace and profit from the ’90s dot.com boom.

As the New York Post’s first computer/Internet columnist, Motavalli had a ringside seat while Disney, Time Warner, News Corp., and others tripped over themselves to get on board the emerging Internet phenomenon. With little certainty about what the successful and manageable applications of the World Wide Web would be, media corporations and their leaders nonetheless rushed to spend hundreds of millions of dollars so as not to get left behind. They helped create the dot.com bubble of inflated salaries and unlimited expectations that burst so mercilessly in 2000–01. Motavalli, who admits being swept up like everyone else in the initial euphoria, narrates with an intimate feel for the year-by-year developments: the promises and glorious optimism of a dawning technological age, the maneuvering moguls and CEOs, the media executives who doubled their income by switching to the dot.com start-ups, and the chilling reality bath that awaited all. AOL’s Steve Case, Time Warner’s Bob Pittman and Gerald Levin, John F. Kennedy Jr. of George, Time magazine’s Walter Isaacson, and iVillage’s Candace Carpenter are among the many prime movers whose trajectories are analyzed here. Some big winners emerge (AOL, Amazon, eBay, Yahoo), but more common is the fate of one Internet-related stock that fell from $150 to just $3 per share. Motavalli sees this not solely as a tale of greed and ambition run wild, but a telling parable of the herd mentality; when it appears the wheel has been reinvented, everyone wants to go along for the ride, even though the ultimate destination is unknown. Well-researched and dense with names, dates, meetings, and numbers, the author’s recollections may provide more information than most will be willing to download, but he convincingly captures the boardroom machinations of this extraordinary era.

Proves without a doubt that even masters of the universe sometimes lose their heads, and then their shirts.