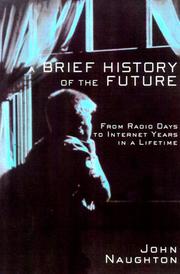 A BRIEF HISTORY OF THE FUTURE

From Radio Days to Internet Years in a Lifetime

A brief history of the Internet, told by a British engineer and journalist.

British journalist Naughton (The Observer) begins by reminiscing about ham radio, an early example of the sort of virtual community the Internet has created. He then points out how, without advanced technical knowledge or training, anyone with computer access now has the ability to communicate almost instantly, and without intermediaries, with a huge fraction of the human race. Surprisingly, the technology that permits this stunning access to the world was created very haphazardly. In the beginning was Arpanet, the by-blow of a Cold War defense agency’s desire for easy exchange of data between computers. To make certain that key information could survive a large-scale nuclear attack, the equipment was designed to full military specifications; the first “modems” came enclosed in heavy steel cases and were painted battleship gray. But the project assumed a life of its own almost from the day of its inception. A key theoretical breakthrough, the transfer of data in byte-sized packages, came from a British research team. E-mail, which rapidly became the single most popular feature of the net, was an unauthorized extension of a program originally meant to trade messages between users of a single machine. And the original Web browser came from the desire of a scientist at CERN, the European nuclear research facility, to organize the masses of data the scientists had to deal with. Naughton’s ability to give the nonspecialist reader a sense not only of the people but of the ideas and processes involved in the creation of the Internet is complemented by a style that emphasizes the human dimension of his subject, and (best of all) lets the reader see why it is worth caring about.

A comprehensive and remarkably well-written overview of this key event in recent history.