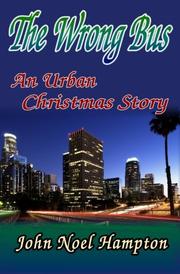 Debut author Hampton delivers a novella about a chance meeting of two troubled people during the winter holiday season in Los Angeles.

Christmastime in California is proving difficult for the elderly Ida Hanson: “Winter had laid its usual modest claim on coastal Los Angeles, but it was enough to chill Ida to the bone.” But the chill for Ida isn’t merely physical; her only friend is her housekeeper, Madeline, and her home urgently needs painting. Meanwhile, in a different part of town, Junior Thomas has his own share of problems. His mother, a drug-addicted prostitute, is back in his life, so his dream of one day becoming a doctor is quickly being thrown into jeopardy. After she steals from Junior’s grandmother, Eula, who lives with him, the question of how they’re going to pay the rent becomes a pressing issue. They also face the problem of how to repay Junior’s mother’s dealer, a rather unpleasant, violent figure named Cato. When public transportation allows Ida’s and Junior’s lives to intersect, things change for both of them in ways that neither could have predicted. This tale, billed as an “Urban Christmas Story,” is a sentimental one. Savvy readers will be able to guess early on how a wealthy, albeit aloof, old woman might help a street-smart but desperately poor young man. However, the fun comes in seeing how all the plot pieces fit together. The book tends to embrace stereotypes rather than subvert them, though; for instance, Junior’s fast-food restaurant co-worker sometimes “lapse[s] into his jive talk.” However, its main emphasis is on showing the unexpected harmony between perfect strangers, and readers eager to find that theme won’t find it difficult to do so. Others, though, may find the story’s outcome to be excessively sweet.

A pleasant, modern Christmas tale, but one that may be too mawkish for some.