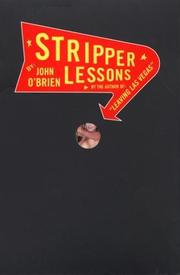 When O'Brien's first novel, Leaving Las Vegas (1991), became a hit movie, making his reputation as a chronicler of social misfits, his early death (196994) was properly mourned. But, sadly, this addition to his small body of work, while it reminds us of his distinctively harsh vision of life, is not a repeat of that earlier book. Mild-mannered Carroll has two things going in his life: his day job as head file clerk in a conniving L.A. law firm, and his nightly refuge, Indiscretions, a stripper club that draws him like a moth to a flame. All but invisible in both places, he begins to metamorphose suddenly one night when a new dancer, Stevie, enters the club and becomes the object of his obsession. Too shy to talk to her at first, by the second night he's mustered just enough courage to request a private dance with her, which, even though it takes all his money, gives him a taste of heaven and the conviction that Stevie is an angel. The next step for Carroll is to buy a new wardrobe, one that he thinks will impress her, but as his confidence builds and more contact with her makes her friendlier toward him, he inadvertently crosses the line that separates them, violating the club's rules of conduct with immediate, devastating results. Now wild in his desperation, he refuses to go back to his cocoon of meekness, first confronting another dancer in the club, then the powers-that-be in the firm, deliberately crossing the line each time, and finally walking away from his job to see if he can't salvage some hope of friendship with Stevie—who responds not unkindly to his need. The club world, distilled to its seedy essence, and O'Brien's acknowledged grasp of lonely lives, male and female, are impressive. But the essential element of character chemistry never clicks here, so that plot contrivance and cool observation remain mostly visible for what they are.