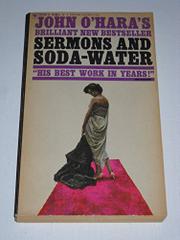 These three novellas return to the atmosphere of Butterfield Eight and Appointment In Samarra in recalling the 20's and 30's, the people who inhabited those years, and the way their lives developed. The teller is Jim Malloy, son of the doctor in Gibbsville, Pa., who first catches up on actress Charlotte Sears' story which involves the junior Williamsons; next he recaps on the grim to vicious but strangely loyal marriage of Bobbie and Pete (this has recently appeared in The New Yorker) and his last review is of what happened in Mrs. Williamson's life and where the conflict between her and Charley Ellis' wife Nancy began. With a background of the Pennsylvania town in Lantengo County, Jim, as narrator, sees the desperate need for love which was confused with love itself and views, with a distant compassion, the youth that went into life without youth itself — and is a careful annotator of the tribal customs whose dossier of the period catches a sharp etching of what it was like then with the liquor, sex, the collegiate impress, social strata and economic change over. This should get a welcome from his older admirers — and open the eyes of his new.