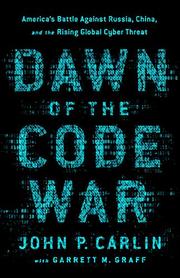 DAWN OF THE CODE WAR

“We cannot allow Vladimir Putin to ruin the internet for the rest of us.” So warns the former assistant attorney general for national security in this urgent book.

How much does cybercrime cost? “It’s not like the early days of the FBI when you could just total up the cost of the nation’s stolen cars or add up the amount of money that walked out the front door with bank robbers like John Dillinger,” writes Carlin, in a book co-authored by Wired writer Graff (Raven Rock, 2017, etc.). Carlin adds to a recent flurry of books about hacking, cybersecurity, and related issues with this smart if sometimes seemingly overwrought examination of the battles raging behind computer screens around the world. He answers his own question: The cost is in the hundreds of billions of dollars in actual costs and lost productivity. That’s just the beginning of it. After the first wave of hackers—Carlin puts Napster and file-sharing archvillains Shawn Fanning and Sean Parker in that early group—have come thousands of Chinese operatives, some masquerading as students or researchers, whose job it has been to steal advanced technology for reverse-engineering back home. Writes Carlin, indignantly, if the Chinese army had arrived at a Boeing plant and loaded trucks with carton after carton of schematics, the U.S. response would have been swift, but as it is, policy and sanctions are both poorly conceived and coordinated. The author notes that two decades into the internet era, the Obama administration “was still trying to make sense of the patchwork of roles and responsibilities that agencies had assumed as the world shifted from analog to digital.” Given the threats Carlin enumerates, including election hacking and the theft of intelligence files, responses “created and refined in real-time” are increasingly necessary—but not forthcoming.

Given the lack of developed policy, if you’re alarmed by the thought of Russian election tampering in 2016, you’re likely to be even more so come the midterms—and by this dire book.