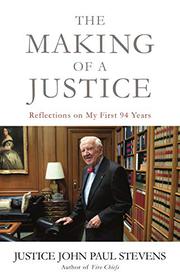 THE MAKING OF A JUSTICE

Reflections on My First 94 Years

The retired Supreme Court justice chronicles his impressive life story, including his 34-year tenure with the court.

Born in 1920, Stevens (Six Amendments: How and Why We Should Change the Constitution, 2014, etc.) recounts his privileged upbringing, early law career, and lower-court experience before providing nearly 400 pages of year-by-year decision-making as a Supreme Court justice. A Republican appointed by President Gerald Ford, Stevens transcended the party ideology of many court colleagues in order to work together with those appointed by Democratic presidents. Despite the conventional wisdom of court chroniclers who identify justices as “conservative” or “liberal,” the author’s majority opinions and dissents cannot be easily pigeonholed. He candidly shares his thought processes on hundreds of cases, often openly criticizing his fellow justices for their lack of legal acumen and/or lack of compassion. Stevens is frequently critical of justices Antonin Scalia and Clarence Thomas for the refuge they have sought in the theory of originalism. Refreshingly, though, the author never attacks his fellow justices in a personal, gossipy manner, and he discusses his varying degrees of friendship with each of them. Stevens theorizes that the dynamics of the court—and the nature of the rulings—undergo transformation every time a new justice joins. As a result, the author presents brief sections about the immediate impact of each new justice during his 34 years, ending with his successor in 2010, Elena Kagan. Although Stevens reveres the court’s reputation as a nonpartisan arbiter, he realizes that reputation has never fully recovered from the politically tinged 5-4 ruling in 2000 that handed the presidency to George W. Bush rather than Al Gore. The author also offers searing commentary on cases involving abortion rights, gun control, wrongful convictions in criminal courts, campaign finance, and many other ongoing societal issues.

The author’s consistently absorbing commentary on a wide variety of legal cases will require close attention by readers, but the payoff is worth it.