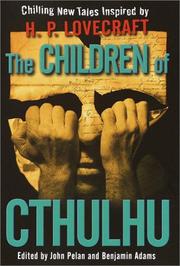 THE CHILDREN OF CTHULHU

The spirit of the Rhode Island Master descends upon 23 disciples willing to summon up the squids and squirms of the 20th-century’s weirdest and most influential horror writer. Over 107 other Cthulhu-“inspired” books cling to the eldritch penman from Providence. One tastes less of the coppery tang of blood from Lovecraft’s pen than the ripple of fear when cosmic Yog-Sothoths slip under your skin and race up your back—and you go about switching on lamps and the backyard houselight, checking the garage, weighing the creaks in the attic, and choosing not to go down to the cellar. Standouts here include esteemed stylist Poppy Z. Brite’s “Are You Loathsome Tonight?”—a tale worthy of Elvis’s blue suede shoes that ties up the Tupalo Troubador’s favored peanut-butter-and-banana sandwiches fried in butter with Lovecraft’s thoughts about sensation. Brite in no way tries to explain or come to grips with Lovecraft, whose aliens remain unknowable even to him. Just as the unconscious is truly unconscious and not to be plumbed, aliens we might understand would no longer be alien. As Pelan and Adams explain, describing his creations out of space and time, Lovecraft’s Cthulhu and Nyarlathotep are beyond genealogy. In China Miéville’s “Details,” an old woman recluse sees something looking at her from the lines of a brick wall and the leaves of a tree, something that is colonizing her memories and mind. Also here: the late and grisly Richard Laymon, with “The Cabin in the Woods”—about the “horrible thing” that wants to get into his cabin after sunset—and Caitlìn R. Kiernan (the recent Trilobite), who, in “Nor the Demons Down Under the Sea,” brings her glorious prose to bear on the geology of horror.

We repeat our earlier prayer to Arkham House, that they reprint the original Outsider and Others (1939), the basic text for all Lovecraft fans.