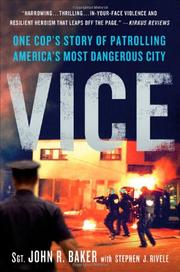 One Cop's Story of Patrolling America's Most Dangerous City

The life and work of a tireless Compton, Calif. beat cop.

Baker spent his early years living in the Los Angeles suburb of Boyle Heights, a place filled with a variety of ethnicities who had migrated there, primarily Latinos and African-Americans. This integration came in handy when the family relocated to affordable Compton in 1950 and he was sent to Catholic school in nearby Watts. As a white boy, he stood out in the predominately black-populated school, but held his own excelling as a natural athlete. Black gang activity soon dominated the western side of the city, while the white citizens organized themselves in the East. By the time Baker joined the Marines, the Watts riots had broken out and Compton became a war zone, spurring the author to join the Compton Police Department in 1968. Capably tracing his distinguished 18-year career policing “America’s most dangerous city,” the author briskly narrates a cavalcade of harrowing stories as he graduated from a cautious rookie to a respected if battered officer to a seasoned sergeant. Par for the course was the violently bloody, racial gang warfare (Baker offers an expansive historical perspective), rescuing rape victims, drug trafficking and their resultant homicides, rampant gunfighting and the backlash of smug, fearless criminals who threatened law enforcement’s grip over their dominion. Additionally, Baker received a crash course on the inside politics, corruption and nepotism of the police brigade. Academy Award–nominated screenwriter (Nixon, Ali), Rivele (co-author: Lieutenant Ramsey’s War: From Horse Soldier to Guerrilla Commander, 2005, etc.) ably compiled boxes of recordings that Baker created after initially dismissing the offer to tell his life story. The result is an exhaustive, thrilling, ultraviolent story about the endless struggle that the Compton PD (who disbanded in 2000) faced in attempting to prevent the city from “dissolving into chaos.”

In-your-face violence and resilient heroism that leaps off the page.