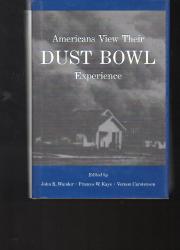 A mixed bag of modern historical essays and contemporary journalistic accounts of the 1930s Dust Bowl. Perhaps the greatest environmental disaster to befall the US, the so-called Dust Bowl, resulted from poor farming practices, livestock overgrazing, and drought. “In its narrowest technical sense,” the editors write, “the term Dust Bowl refers only to a small district with reddish-brown soils in northeastern New Mexico, southeastern Colorado, southwestern Kansas, and the panhandles of Texas and Oklahoma during the 1930s.” Yet, thanks to the writings of John Steinbeck and the photographs of Dorothea Lange, among other chroniclers, the image of the Dust Bowl spread to cover a much greater area as a dominant Depression image. With the arrival of the Dust Bowl, formerly productive topsoil floated off on the winds for hundreds of miles in all directions, forcing rural Americans already hard hit by economic disaster to abandon their farms and make for the cities or, in the case of the “Okies,” for the fields and orchards of California. As several of the newspaper and magazine accounts included in this volume attest, the exiles did not always leave easily. In Nebraska, for example, writes Lief Dahl in the New Republic of January 18, 1933, displaced field hands formed a leftist “Farmers’ Holiday movement” to battle bank foreclosures, while Margaret Bourke-White, writing for the Nation, describes the untoward sight of Kansas farmers feeding tumbleweeds to their starving cattle. The journalism included in this volume is of a very high quality, politically charged and historically rich. The historical interpretations are less interesting, unless you happen to have a passion for statistics on Protestant church memberships in Haskell County, Kan., circa 1936. Still, a useful resource compiled by three academics for students of American history, particularly concerning the rise of the populist political movement. (8 b&w photos, 2 line drawings, 13 maps, not seen)