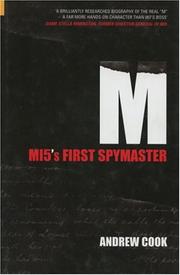 Say “M” in the context of British intelligence, and you’re likely to conjure up an image of the avuncular but death-dealing Bernard Lee, late of the first James Bond films. Whereas that M was a deep-background type, holed up in an underground lab, the eponymous M, an Irish cop named William Melville, enjoyed being known and seen. He had been admitted into the London Metropolitan Police “as PC 310 to the register of E Division (Bow Street and Holborn) on 16 September 1872,” as intelligence analyst Cook (Ace of Spies, 2004, etc.) briskly writes, but was promptly dismissed for insubordination in an effort by management to crush collective bargaining. Soon rehired, he climbed through the ranks, progressing from busting shoplifters and errant milkmen and tram conductors to chasing down foreign terrorists. These were numerous in the days of Victoria, and particularly in the time of her jubilee, when “Irish Invincibles” and other bad apples were busily blowing things English into smithereens. Stationed across the Channel, Melville returned home at about the time London-based detectives were being pilloried for letting Jack the Ripper slip through their fingers. Unblemished, he spent his time trying to infiltrate various “nihilist” gangs of the kind who fill the pages of Joseph Conrad’s Secret Agent; his expertise at mounting clandestine operations soon won him favor among the brass, though the anarchists were not at all happy, for they were “trailed by police close as sheepdogs,” as one Paris newspaper put it. The struggles between Melville and his many enemies acquired a kind of mythic gloss, and, Cook notes, “it is no coincidence that this period sees the first success of the detective novel.” Melville’s subsequent work as organizer of an allied military and police intelligence network was field-tested in the Boer War, but especially in WWI, when MI5 came into its own, and it was found to fill the bill.

For Bond fans and true-crime buffs, especially, a leisurely excursion into the early days of modern espionage.