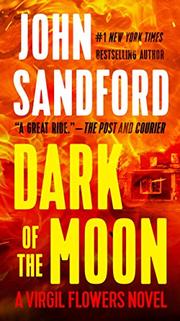 DARK OF THE MOON

Virgil Flowers, the Minnesota Bureau of Criminal Apprehension investigator introduced as a sidekick to Lucas Davenport in Invisible Prey (2007), gets a death-enriched case of his own.

In a little town like Bluestem, everybody knows everybody’s business, and what everybody knows these days is that everybody’s getting killed. The flagship victim is Bill Judd, 82, the wealthy lawyer/banker/trader who made enemies right and left with a Jerusalem artichoke pyramid scheme 20 years ago. He’s an obvious target for the methodical arsonist who burned down his house with him inside. But the other victims are much more inoffensive: ancient physician Russell Gleason and his wife, retired Stark County sheriff Roman Schmidt and his wife. The current sheriff, Jimmy Stryker, doesn’t mind working with a BCA type like Virgil. He doesn’t even mind the sidelong gazes Virgil casts at his recently divorced sister, Joan Carson. And he brings up his share of promising ideas about the case, which involves money laundering, a meth lab, a surprise claimant to the Judd estate and a truly nasty man of the cloth. But could he be the target of his own manhunt? The advanced age of the victims makes Virgil think that the crimes could have deep roots—maybe as deep as a “man on the moon” party Bill Judd hosted back in 1969. Sadly, it seems to take another 38 years for Virgil and company, making endless rounds of Bluestem to ask really obvious questions, to close the case. The pace is so much slower than when Davenport is in charge that you may wonder if Virgil, a perfectly reasonable hero, is under sedation. It’s not until the Acknowledgments, which are deferred till the end of the story, that this last and deepest mystery is cleared up.

A high-fatality, low-octane procedural that has its points but lacks the wow factor. Bring back Lucas Davenport.