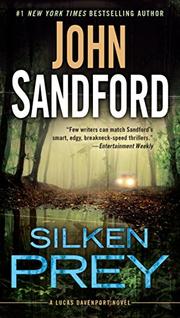 Dirty political tricksters give Lucas Davenport his most satisfying case in years.

Even though he’s a conservative Republican, Sen. Porter Smalls is widely known to be a lot more liberal in his sexual ethics. But not so liberal that you’d expect child pornography to pop up on his personal office computer. The horrified staffer who accidentally finds it there calls her father, and he calls 911. Minnesota governor Elmer Henderson, a Democrat, is no friend of Smalls, but he’s impressed by his claims of innocence, and he doesn’t want any blowback if the kiddie porn turns out to have been planted. So he calls Lucas Davenport, asking him to investigate but keep everything confidential. The hush-hush first phase of the case ends when Lucas finds evidence linking the porn stash to Bob Tubbs, a political jack-of-all-trades who’s disappeared and hasn’t used his credit cards for days. Given the cover of a homicide investigation, Lucas’ Bureau of Criminal Apprehension takes the case public, solving one problem—how can Lucas talk to anybody if he’s sworn to secrecy?—but raising another. For the trail leads to some very awkward spots: the Minneapolis Police Department, from which it’s pretty clear the damning pictures came, and the campaign of Taryn Grant, the wealthy, well-connected heiress who wants Smalls' Senate seat. With the election less than a week away, Lucas is under intense pressure to get results without stepping on the feet of Grant, who Sandford (Stolen Prey, 2012, etc.) indicates early on is indeed in this mess up to her eyeballs. Meanwhile, another Sandford veteran to whom Lucas turns for help hatches a plot to steal Grant’s jewels from the safe in her home. Complications ensue.

Sandford keeps every stage of the investigation clear, compelling and suspenseful while peeling back layer after layer of a world in which “everybody was hot, everybody was rich."