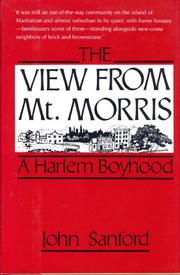 THE VIEW FROM MT. MORRIS

Nonagenarian Sanford, who most recently memorialized his wife, Maggie (Maggie: A Love Story, 1993), recalls his childhood in Harlem in a memoir that is also a bittersweet apology to his father. In 1904, the year in which Sanford was born, Harlem was "still an out-of-the-way community on the island of Manhattan and almost suburban in its quiet, with frame houses—farmhouses some of them—standing alongside newcome neighbors of brick and yellowstone." He lovingly recalls the childhood landmarks of the place (Reid's Drug Store, Nick Stano Shoe Repair, and Bachrach's Ice Cream Parlor), as well as the apartment houses he lived in: the grand Gainsboro overlooking Mt. Morris Square when the family was flush, the much more modest Cabonak that became home after the Panic of 1907 bankrupted his father, and the apartment on West 117th Street, a place that reflected his grandfather's "unadorned life," where Sanford later lived with his grandparents. These recollections, interspersed with vignettes that anticipate his eventual meeting with Maggie, are secondary to the main theme, which is atonement for a thoughtless youthful act that irreparably hurt his father. Sanford's father was a Russian Jew who came to the US at the age of five. He became a lawyer, and though his practice was only intermittently successful, he was always the most affectionate and generous of fathers. Sanford's mother died when he was ten and thereafter Sanford and his father moved in with her parents. But when his father remarried in 1920, his grandfather and his mother's sister turned so against his stepmother that the boy refused to live with his father in his new home. This act of defiance ultimately broke up the marriage, and he understood too late the "sorrow of a wise father for a foolish and wilful son." The past in soft sepia tones, except for the sorrow Sanford caused, which still remains hard-edged and raw. Quiet but affecting.