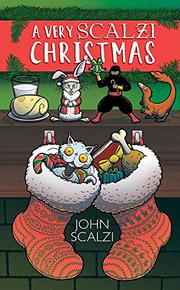 Bestselling sci-fi author Scalzi injects plenty of holly and jolly into his second short story collection, a follow-up to Miniatures (2016).

You’ve finished rewatching your bootleg version of The Star Wars Holiday Special and every episode of Futurama featuring the murderous Robot Santa, the Doctor Who Christmas special won’t be on for hours yet, and you already have Jonathan Coulton’s “Merry Christmas From Chiron Beta Prime” on infinite loop. How else can you fill the Yuletide season with geekiness and laughs? This slim stocking stuffer may be just what you need. The Christmas-themed works contained herein offer a surprising, heartwarming, but potentially threatening Christmas in July; some satiric listicles regarding holiday songs and TV shows; and amusing but ultimately somewhat repetitious interviews with Santa’s lawyer, the reindeer wrangler, the Christmas Bunny, and a certain Bethlehem innkeeper; as well as two sappy but sincere pieces about the true meaning of Christmas and family. The collection is bookended by a few Thanksgiving selections, including an enjoyably specific pop culture–studded grace, and an uproariously funny set of New Year’s resolutions involving clones and deadly robots from a despondent man whose ex-girlfriend is now dating his co-worker Chuck.