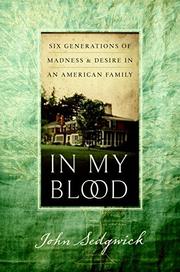 Six Generations of Madness and Desire in an American Family

In 2000, at age 46, Sedgwick was enjoying a thriving writing career and a loving marriage that yielded two beautiful daughters. But poor investment choices, one daughter’s sports injuries and general malaise slowly chipped away at his happiness and tipped his downward spiral into debilitating depression. Sleepless and crazed from the reverse effects of a sleeping pill, suicide seemed appealing, but instead, Sedgwick began psychotherapy and embarked on a journey of self-discovery by researching his New England family lineage, which dates back to the Washington, Jefferson and Adams’ presidencies, and the origins of his present mental state. Among his roots he finds an inherited legacy of mental illness and desperate behavior. Sedgwick’s multi-generational exploration entailed scouring mountains of previously unseen archives and making personal visits to the original townships of his ancestors, enabling the author to reanimate his family heritage beginning with Judge Theodore Sedgwick, who, in the late 1700s, was a spry lawyer with political aspirations in the Berkshires of leafy, colonial western Massachusetts. But second wife Pamela’s family had a history of psychiatric illness. When daughter Catharine Maria grew up, she became a renowned novelist, even as her brother, Harry, dissolved into madness. The legacy of Sedgwick’s grandfather Babbo is melodrama at its finest, and its story is nicely juxtaposed with tender memories of his manic depressive mother and his detached relationship with his father. Years later, a cousin, Edie, became Andy Warhol’s star-struck protégé, then died tragically. The author’s peace arrives with the ultimate embrace of his manic depression: the Sedgwick “family disease.”

Surely one of the most exhaustively-researched attempts to exorcise personal demons.