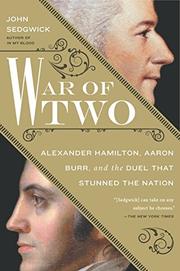 Alexander Hamilton, Aaron Burr, and the Duel that Stunned the Nation

A parallel biography of two prominent figures from the Federalist era whose lives came into catastrophic collision on a dueling ground.

Alexander Hamilton had a dazzling career as a young man. Chief aide to George Washington during the American Revolution and author of most of the Federalist Papers, as the first secretary of the treasury, he performed the miracle of putting the new nation's finances on a sound footing. Aaron Burr, a lawyer of prominence and brilliance equal to Hamilton's, engaged in politics to advance his own interests rather than any cause. He came within a single electoral vote of being elected president in Thomas Jefferson's place in 1800, gaining the vice presidency and Jefferson's enmity instead. Sedgwick (In My Blood: Six Generations of Madness and Desire in an American Family, 2007, etc.) presents an emotional and psychological biography of the pair, partially inspired by Gore Vidal's satirical novel Burr (1973). In crisp, lively prose, the author presents evenhanded and insightful profiles of two highly intelligent, driven men with substantial flaws and very different characters: the hyperactive Hamilton, of volcanic output and intense devotion to the Federalist cause, the brooding and libidinous Burr, communicating in code, both attached to the contemporary lethal cult of honor. Sedgwick strives to present this as something of a Greek drama in which his characters gradually swirl closer together, increasing in hostility until their duel appears almost inevitable. The strategy is not entirely successful. Burr and Hamilton cooperated occasionally and didn't come into conflict with each other often or sharply enough to warrant the characterization as archrivals. By the time of their duel, they were both washed up, in severe financial distress, and with no political prospects. It almost seems as though they fought because they no longer had anything better to do.

An overly detailed but entertainingly irreverent account of two consequential men from the dawn of the American republic.