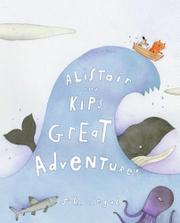 Segal pairs an impulsive cat and a hesitant dog on a quick but exciting nautical outing. Bored one Tuesday, marmalade Alistair pushes the smaller Kip into helping to build a boat. Off the two float, downstream and into the ocean—where a huge wave plunges them into a sea thick with menacing sharks and other creatures. Then they crawl onto an island that turns out to be a friendly whale who ferries them back home. “That was fun, Kip. Tomorrow let’s build an airplane!” Tales with a similar plot, such as Jason Chapman’s Ted, Bo, and Diz (2007) or Linda Bailey’s Stanley At Sea (2008), illustrated by Bill Slavin, tend to have subplots or side business; here there is barely a pause in the action, and the text, which is printed over the simple watercolors, is so pared-down that it several times gives way to wordless pages or spreads. Even pre-readers will have no trouble following along on this up-and-down ride. (Picture book. 4-6)