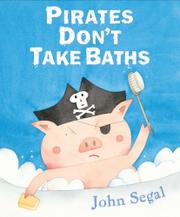 Echoes of Runaway Bunny color this exchange between a bath-averse piglet and his patient mother. Using a strategy that would probably be a nonstarter in real life, the mother deflects her stubborn offspring’s string of bath-free occupational conceits with appeals to reason: “Pirates NEVER EVER take baths!” “Pirates don’t get seasick either. But you do.” “Yeesh. I’m an astronaut, okay?” “Well, it is hard to bathe in zero gravity. It’s hard to poop and pee in zero gravity too!” And so on, until Mom’s enticing promise of treasure in the deep sea persuades her little Treasure Hunter to take a dive. Chunky figures surrounded by lots of bright white space in Segal’s minimally detailed watercolors keep the visuals as simple as the plotline. The language isn’t quite as basic, though, and as it rendered entirely in dialogue—Mother Pig’s lines are italicized—adult readers will have to work hard at their vocal characterizations for it to make any sense. Moreover, younger audiences (any audiences, come to that) may wonder what the piggy’s watery closing “EUREKA!!!” is all about too. Not particularly persuasive, but this might coax a few young porkers to get their trotters into the tub. (Picture book. 4-6)