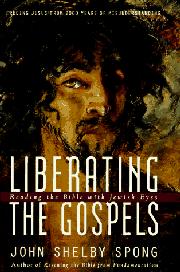 Reading the Bible with Jewish Eyes

Maverick Episcopal bishop Spong (Resurrection: Myth or Reality?, 1994) argues that to take the Gospels as literal history is to miss their essential point. In recent years Spong has gained notoriety for his unorthodox views on doctrine and sexual morality. Here he reproduces the ideas he put forward in Resurrection, arguing that the Gospels are not historical narratives but exercises in midrash, a Jewish genre of biblical exegesis. Spong takes midrash beyond its narrower Jewish definition to mean a method in which biblical themes are interwoven in order to describe things beyond ordinary human experience and language. Nearly 2,000 years of anti-Semitism have blinded Christians to both the Jewishness of Jesus and the ``midrashic'' nature of the Gospels. According to Spong, for example, the account of the Sermon on the Mount is really a device to show Jesus as the new Moses, while the feeding of the multitudes is a way of bringing Elijah and Elisha material into the story of Jesus. Spong hopes to break the impasse between fundamentalists who believe that the Gospels are literally true history and liberals who reject miracles and the supernatural as projections of a prescientific mentality. However, for all his talk of a true ``God experience'' lying behind the Gospel stories, it is hard to tell how Spong's position is substantially different from that of the liberals whom he condemns as spiritually bankrupt. Like them, he assumes a priori that supernatural events cannot happen, and he rejects the historical value of vast areas of the Gospels, such as the Last Supper and the raising of Lazarus, reserving for them only a pale, psychological meaning. Spong praises the ultraliberal Jesus Seminar and lambastes orthodox Christian scholars as lacking either learning or moral courage. Well written and scholarly, but unlikely to fill anyone's spiritual void. (Author tour)