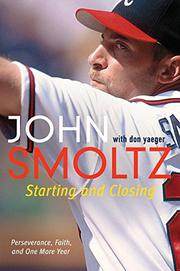 Perseverance, Faith, and One More Year

by John Smoltz with Don Yaeger

Passable baseball memoir by retired pitching ace Smoltz, centered around his efforts, at age 41 and after major shoulder surgery, to pitch just one more year.

The author knew at an early age he would find his fortune as a professional ball player. For 20 years he was a stellar pitcher, both starting and relieving for the Atlanta Braves as they won 14 straight division championships and a World Series. In 2009, however, age and injury seemed to catch up to him, and he moved on from the Braves to the Red Sox and then briefly to the Cardinals. While he enjoyed mixed success in his final year, Smoltz has more in mind than simply talking about success in baseball. He uses his success as a metaphor for how to succeed in life. While he overcame many injuries and obstacles to stay in the big leagues as long as he did, his advice is too often expressed in sincere but hoary bromides (“I always looked at [failure] as an opportunity to grow”) that do little to inspire. Similarly, his deep and honest profession of Christian faith (“I truly accepted Jesus Christ as my savior in 1995”) gets lost in odd juxtapositions. For example, at one point he writes, “the two things I can point to that kept me persevering year after year for so many years were my faith in God and golf.” Smoltz seems not to mean to give the two equal billing, but some readers may find it odd nonetheless. When Smoltz talks about baseball, the book comes alive. Whether he’s discussing the differences between starting pitching and relief pitching and the difficulties of switching from one to the other, as Smoltz did more than once, or why power pitching wins in the postseason, or why the Braves won only one World Series, it all has the ring of authenticity and wisdom.