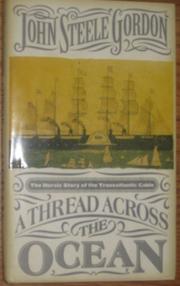 A THREAD ACROSS THE OCEAN

The Heroic Story of the Transatlantic Cable

An intriguing tale of inventors, tycoons, and an engineering feat that changed the course of economic history.

One of those adept, impressively learned, sometimes impractical 19th-century woodshed thinkers and tinkers, Cyrus Field knew only a little of the hard science behind stringing a submarine telegraph cable that would link the financial markets of London and New York. And good thing, too, writes business historian Gordon (The Great Game, 1999, etc.): if he had, “he might well have dismissed the entire notion as impossibly fanciful.” Field was not the first to conceive such a venture, the author notes; as early as 1850, an English engineer and a Canadian bishop had independently proposed that a telegraph line be strung between Newfoundland and Ireland, the landmasses flanking the shortest crossing of the North Atlantic. But Field was the first to act on the idea, writing to Samuel Morse to enlist his support and finding another ally in the great but largely unsung naval surveyor and architect Matthew Fontaine Maury. In 1854, Field, philanthropist Peter Cooper, and other partners set about raising $1.5 million for the venture; that turned out to be nowhere near sufficient, even though it was a huge sum for the time (by way of comparison, Gordon notes that the entire annual federal budget in that year was $58 million). Drawing on scientific discoveries and technological innovations by the likes of Michael Faraday and Werner von Siemens, Field and company eventually managed to make the transatlantic cable a reality, and even if its early iterations turned out to be duds, their work did in fact revolutionize communications and international finance and “laid down the foundation of what would become, in little over a century, a global village,” as Gordon very capably shows.

Just the thing for the budding entrepreneur, and a pleasure for general readers as well.