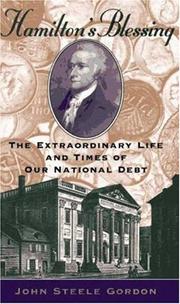 The Extraordinary Life and Times of Our National Debt

American Heritage columnist Gordon (The Scarlet Woman of Wall Street, 1988) deserves credit for attempting a brief history of the national debt aimed at a wide audience, but the result is somewhat disappointing. Gordon argues that debt can be a valuable economic and political tool when used consciously and wisely, as Alexander Hamilton attempted to do, but poses a real threat when it results from an unwillingness to make difficult decisions, as with the current federal deficit. This distinction loses its sharpness when applied to more complicated events, such as the funding of the Civil War and Roosevelt's policies in the 1930s, and is lost from sight during the discussion of Andrew Mellon's supply-side economics of the 1920s. But this theory nevertheless serves to bracket a quick survey of American public finance. Unfortunately, at times Gordon's tendency to skim the surface of selected events and rely on conventional platitudes results in a rather skewed account. It is impossible, for example, to understand why early proponents of the income tax were intent on soaking the rich unless their proposals are considered in relation to the equally unbalanced burdens imposed on the less affluent by tariffs and monetary policies. A one-paragraph discussion of the balanced- budget amendment, labeling it a ``chimera,'' though perceptive, hardly covers the range of relevant concerns. Advocating a flat tax so simple that returns can be mailed in on a postcard and then referring to deductions for business expenditures even suggests a lack of systematic thought. Most importantly, the failings of contemporary politicians cannot be the whole story behind the recent, persistent deficits, for Gordon supplies considerable evidence that politicians have always had failings. For those seeking to understand the national debt, this book is a good place to start—it's just not a good place to stop.