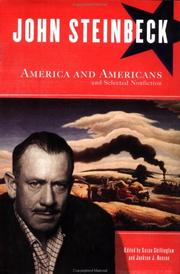 February of next year is the centennial of Steinbeck’s birth and, along with new Penguin editions of six of his novels, Viking is offering up this collection from the other, lesser-known, side of his career. A lifelong journalist, Steinbeck observed and commented on what he saw around him in essays, letters, and criticism; here is some of the best of it. There’s war writing from England and Vietnam; reflections on his own work, including his Nobel acceptance speech; travel pieces from Italy, France, and Ireland; pieces on Henry Fonda, Adlai Stevenson, and Woody Guthrie. While Steinbeck wanders all over the world, most of the material directly addresses America, including the final section, a reprint of his last, now out-of-print book, the heartfelt America and Americans.

More than his familiar, iconic fiction, this collection conveys a real sense of one of our best—and best-loved—writers.