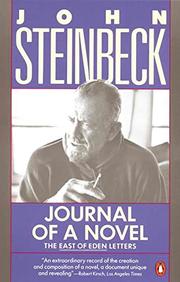 JOURNAL OF A NOVEL

The East Of Eden Letters

What amounts to a working journal affixed to the pages of the first draft of East of Eden (1952) in the form of letters addressed to Steinbeck's editor, the late Pascal Covici. These remarks were originally set down on the left hand pages of a huge notebook, with the day's writing pushed forward on the right. The "letters" cover working days from January 29, 1951 to November 1, 1952, and are just about as useful (to anyone but the author), as writer's warming up exercises are apt to be. Steinbeck worries the bones of structure, the aspects of his characters, but the value of such preor post-creation musings is always in doubt. Often the message hasn't arrived or has already gone out. There is some personal detail—about the childhood troubles of his young sons; frequently expressed affection for his second wife, Elaine; and the quality and durability of pencils. And of course there are expressions of moods blue, bright and downright frantic, induced by, as every writer recognizes, gawdknowswhat. Remarks on contemporary public events or self scrutiny, are few, far between and fragmentary. Although Steinbeck appeared to be at this time a severely disciplined craftsman, he admitted that his method differed from that of The Grapes of Wrath when he wrote "headlong." And considering the impact of the late novelist's Joads compared with the forgettable Trasks and Hamiltons, therein might lie a shade of moral.